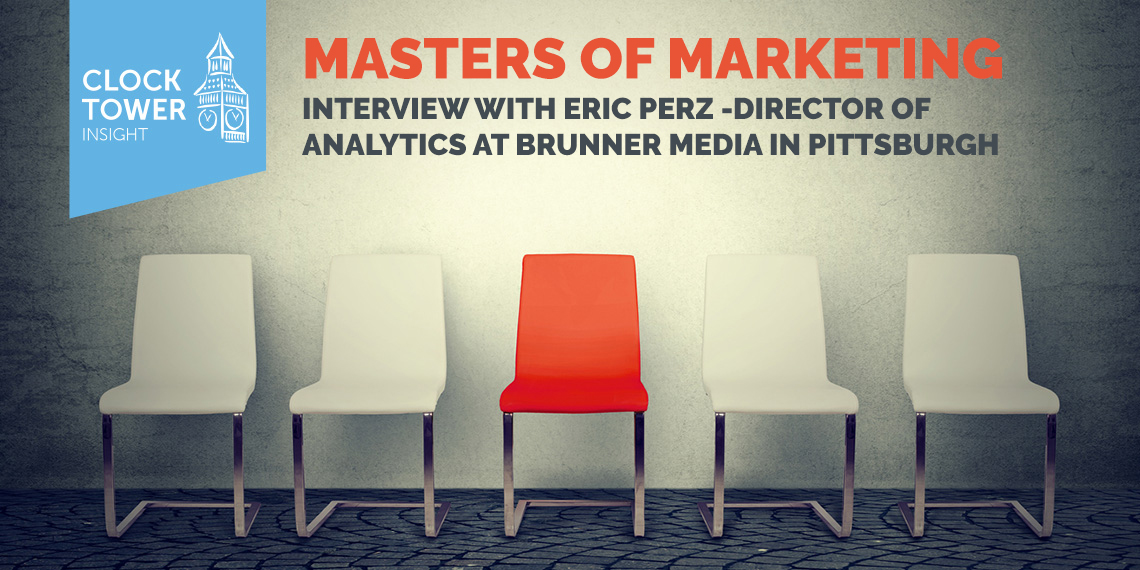 Our Masters of Marketing series turns next to Eric Perz, Director of Data Science at Brunner in Pittsburgh.

The Draw of Brunner Works

Perz was drawn to Brunner because of their affinity for the more advanced statistics. “I could venture to guess, among agencies our size, our data science capabilities compare pretty favorably to most in our department,” he says. Make no mistake, though. Brunner is a full service firm with a creative department, digital media department, PR/social media group, and more.

The Ohio native works there with a gentleman he considers to be a mentor. The pair worked together at PNC Bank and have similar working styles and outlooks on how to approach problems. “In a previous role, I was doing more managing and not as much of the roll-up-your-sleeves type of work that I wanted to do.” Brunner was a good fit. The data science field is changing very fast and to be an effective manager or leader, you’ll lose pace, rendering you less effective.

“I wanted to go back to school, so to speak. I had been doing a lot more strategic work; meetings and the business end of things, but my background is in engineering and I wanted to dive more into the tech work.” The position with Brunner offered Perz the ability to play the role of a leader and help the business grow. “It’s really the perfect balance for me. The agency puts a high priority on data science. Their mission is to bring the data side and the creative side closer together,” he explains. “Their philosophy revolves around ‘do good work, do it efficiently, and still maintain a healthy work/life balance.’”

Do You See AI Being Used More?

Using AI powered live-chat tools to communicate with customers may be really tempting to use more, especially because it’s the newest, shiniest object. “But first and foremost, we have to solve our client’s problems, and that usually should be done through other means.”

“We’re critics of throwing the term ‘AI’ around.” Machine learning and artificial intelligence aren’t the same thing. Machine learning is the building blocks of AI. “We tend to use machine learning in most of our projects, but we don’t usually craft a system that would normally be considered AI. “We use algorithms that may be termed ‘AI’ by some people,” but they’re not really the same.

What Happened to Retail?

“I have a strong opinion on the topic of the downfall of retail. The downfall of the physical space is real.” There’s approximately 24 square feet of retail space per person in America. In the UK and France, that number is less than five. “I don’t foresee us adopting British shopping behaviours, but I do believe that we’ve overbuilt the retail market. Obviously the development and expansion of e-commerce is going to accelerate that return to normalcy in my opinion.”

The obvious online access is a huge contributing factor to this transition. The consumer has specific expectations when it comes to cost and experience. “Going back to when I was a kid and went to the department store. Say you were looking for a shirt. You didn’t always walk out with exactly what you wanted. You got the best shirt available that fit that you could get – so that’s what you got.” That scenario has completely escaped us now. People feel they should get exactly what they want, but there’s no possible way a department store like Macy’s can keep the inventory around that satisfies everyone that walks through their door.

We’ve seen a few trends hit the market lately, including AI and a drive to offer more content-based marketing. Perz believes we’ll also be seeing the loss of granular data and descriptive data sets that we could use for simple modeling. “That’s a good thing. I’m an advocate of reasonable privacy laws and regulations. As a practitioner of analytics, the onus is going to be on that field to come up with the answers for CMOs that currently could be obtained through less sophisticated ways. The less data you have to wade through, the more you’re going to require advanced algorithms to determine the same information. That’s not necessarily a bad thing.”

He points towards the Cambridge Analytica fiasco as an example of the “lack of privacy in digital spaces going haywire.” The reaction to that is still coming. “It’s already happening in Europe, and it’s only a matter of time here in the US.”

Who’s Been The Most Influential Part of Your Marketing Career?

When asked about people that influenced Perz through his career, he didn’t hesitate to name Pat Stroh. He started out with a P.h.D from Carnegie Mellon University in political science before switching over to analytics. “He’s the VP of our group and, as much as he’s leading our meetings, he’s also crunching numbers and coding.” Sometimes an organization can justifiably need a VP to see more of a bigger picture, “but with analytics, if you get too stretched away from the weeds, then you can’t help your team solve problems and understand the workloads, or what those tasks should require.”

“I’ve always taken a little bit from everyone I’ve worked with and always been drawn to people that have more of a technical bend – or at least have a desire to learn more in that space. With my background in engineering, I like building and doing the work and learning new things on the stats side, or tech in general. I feel that people like that are more pragmatic problem solvers. That’s exactly how I’d describe my mentor.” Perz also believes Stroh, like him, works with a pretty (healthy) sense of paranoia. “But just because you’re paranoid doesn’t mean they’re not out to get you. That’s a humorous way to think about it. I’ve always been uncomfortable with my current skill-set. I acknowledge that I’ve always felt there could be something else I could be doing to make myself more productive or marketable.”

He feels there’s always more you can do to help your client. Knowing what you don’t know and trying to address those gaps is essential. He advises you should never be afraid to hire someone that’s smarter than you. “I’ve seen people have those instinctive worries that by hiring a certain person they’d make themselves obsolete. That’s a twisted perception. No one’s going to ding you for having the best team in the company.

Along the same lines Perz believes that you should take care of that team. Don’t be afraid to appreciate their abilities and treat them as partners. “Be empathetic with your team to understand the pressure you’re putting on them or that may be applied to them outside of the office. Try to steer or design their tasks to make your team as comfortable and satisfied and happy in their jobs as you possibly can. That includes giving out tasks according to people’s strengths rather than play to weakness because it’s a recipe for disaster.”

Newcomers to the marketing world need to learn to think broader than just advertising, or even analytics. “The best companies have a very tight correlation between experience, brand, data, etc. Marketers have to be more cognizant of the whole operation of business.” That includes product development, competitive intelligence, technical advancement, or human centered design. “I think when people are interested in marketing they may have one little area in mind. Sure, you need specialists, but the specialties are wider-ranging than what people usually think of.”

“Even within the last year I’ve observed, experienced, and enjoyed the need to expand beyond the statistics or machine learning and to add skills.” It’s become more and more necessary to go beyond just being a stats guy or girl. If you just try to keep yourself siloed in the math part of things, it’ll slow you down too much, which can really be devastating to the business.

Eric Perz can be reached at eperz@brunnerworks.com