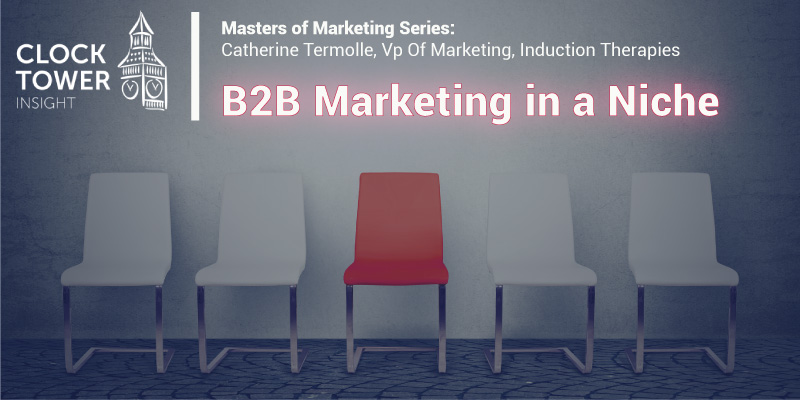 In our next installment of our Masters of Marketing Series, we sat down with Catherine Termolle, Vice President of Marketing for Induction Therapies to hear what she has to say on B2B marketing in a unique niche.

Termolle has over 20 years of experience in skincare and beauty marketing with multiple channels of distribution, including dermatology, mass, and luxury. She’s spent the past 15 years of her career in private label skin care.

Induction Therapies offers a micro-needling device alongside private-label skincare, selling primarily to dermatologists, plastic surgeons, and their staff. The doctor-dispensed world is a very different world than your typical retail world.

This position has been an interesting change of pace, as the company doesn’t budget much for marketing. With a product of such quality, they’ve found they don’t really need to. But that means Termolle has had some obstacles to overcome in moving forward with customer education and marketing.

While working for startup Skin Better Science, Termolle’s position was relocated to Phoenix, Arizona. Unable to uproot her family, she declined the move. Within a short time later, Angelia Inscoe, Founder and CEO of Induction Therapies reached out, offering a position with the company. The two had been former colleagues, and knew each other for over 15 years, so Tremolle knew the two could work well together.

“I didn’t know anything about microneedling,” Termolle recalls. “I had never worked on private label skincare. I had only worked with a branded line.” She’s quickly adapted within the past year and a half she’s been with the company.

A Different Approach to Marketing

“In previous companies, I always had a marketing budget because reps need tools. We would create a sales aid, promotional sales sheets, and signage. We would provide sampling, along with social media and public relations. All of that was wrapped up into the marketing budget.” Things are very different with Induction Therapies, given the clinical nature of what they do. Termolle states the company spends very little money towards marketing.

They push out some promotions every month and there are some set materials that the team has. Being a microneedling device, they offer a sign that their clients can elect to print for themselves.

For the private label side, Termolle has created product information cards that allow the client to apply their picture of the product and have it printed.

There’s a lot that goes into physician-dispensed skincare. “You’re vying for any editorial credit you can get. You’re trying to sell through whatever you sell in. Once you sell the account, you’ve got to be able to pull it through. Otherwise, it sits on the shelves because the staff may not be comfortable with selling. They don’t understand that it’s just a conversation.”

If you’re an aesthetician and are completing a facial, explaining what products you’re using invokes a conversation with the patient and an opportunity for them to buy some of those products. But many times they lack the skills necessary to sell like that.

So the sales reps will host an event for the public. They’ll do something like a Beautiful Skin Day, something around Valentine’s Day or Halloween. Every holiday is a potential event in this particular channel of distribution.

Tremolle tries to apply as many of the tactics with Induction Therapies as she has used in the past, coming up with compelling promotions, creating product packages that will sell, and authoring training materials for the team. She has combined The Core Four products of the line together, which gives reps core products that they can focus on talking about.

She trains the staff to focus on relationships; the relationships the sales reps have with their accounts. That, coupled with tremendous customer service, makes a huge difference. With all the branded labels out there competing for shelf space, that leg-up could make or break you.

Maintaining Integrity in the Face of Fierce Competition

Induction Therapies major competitor received official FDA clearance for one indication of microneedling: treating acne scars, and they’ve tried to use that to their advantage. Any other use of the microneedling pen would still be considered off-label. But their marketing techniques are making accounts nervous that they need to be using something that’s FDA cleared. All other similar devices are in line to be able to file for the same clearances, so the FDA clearance won’t be a huge issue for long.

“It’s difficult when a competitor makes claims that are not necessarily 100% accurate and may be a little misleading,” states Termolle. She recalls a previous time in her career working for Neocutis. Their competitor, Skin Medica, incorporated a lot of dirty tactics into their marketing, and Neocutis had to counter a lot of arguments and had to create various materials to do that.

“People in this channel tend to say just about anything [to make the sale]. They wouldn’t write it down, but they’d say it. So we were trying to overcome objections that weren’t truly objections. What is written, what they are supposed to say, and what they ended up saying were often very different things.”

“I’ve been very lucky to have always worked for very ethical companies. They’ll overcome objections, but they’re not going to bash someone else to do it. That’s not how you play the game.” If you’re involved with those tactics, then your accounts won’t trust you anymore.

With Induction Therapies, they always point out the discrepancy, but they have backup for their product’s quality. They have a superstar key opinion leader on their side who has authored a white paper with another doctor and other publications, talking about microneedling and their device. Once many people do a demo with their device, Termolle feels it’s pretty much a done deal. Being the most powerful one on the market, offering safety and an outcome comparable to some of the more expensive laser treatments but at an affordable price, has its perks. “Once people try it, they really do turn to us.”

So it pays to be the bigger man or woman. Letting adversity pull you down that rabbit hole does no good, and could only hurt your business in the long run. Smart, ethical tactics backing a quality, first-rate product will always win over in the end.