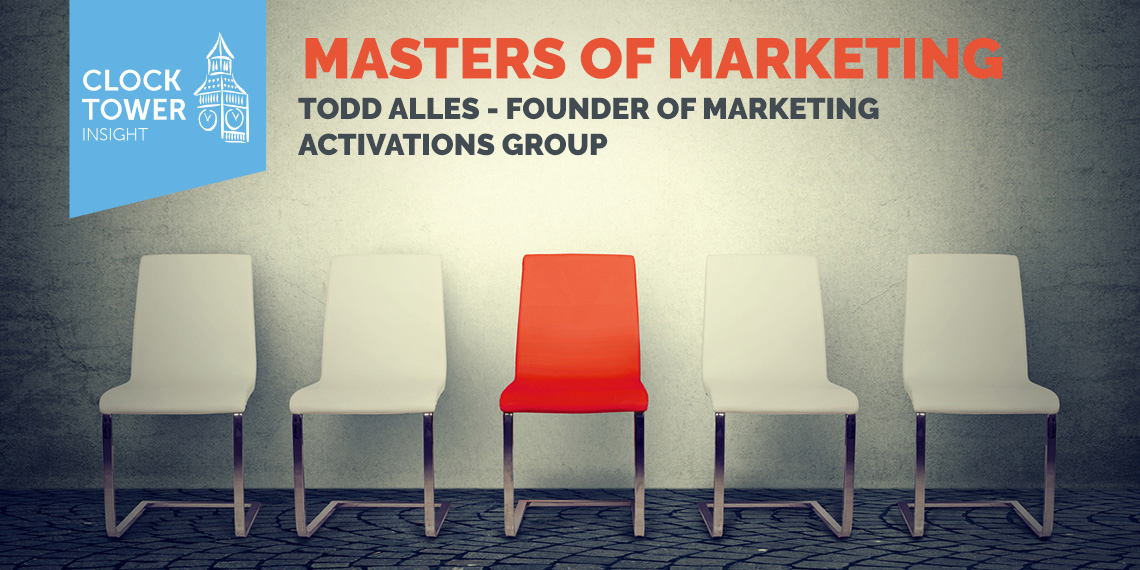 Our exclusive Masters of Marketing series turns to one of the founding partners of Marketing Activations Group (MAG), Todd Alles. MAG is a full-service experiential marketing agency that specializes in sports events, representing sponsored teams and leagues, as well as individuals. They have extensive experience with large-scale event creation and sponsorship activation. By pioneering new ideas and utilizing proven techniques, they’re able to elevate sponsorship visibility.

Since their inception in 2005, Alles has seen a shift within their marketing department to accommodate the uptick in tech and the way consumers are taking and viewing marketing messages, ads, and promotions. He’s adapted his focus to stay abreast of things. Being successful today means having a deep understanding of the consumer’s psyche. Marketing Activations Group’s clients want their hands on what is new and innovative and are looking for ways to continue to be leaders in their respective industries.

“I think we could see the trends in the social networks and outlets,” Alles says in regards to the changing needs of the market. “You need to be able to go above and beyond and try to be authentic, and the leader.”

MAG has incorporated ads in self-driving cars for one tech-based client. When asked whether or not they utilized any newer technology strategies, Alles was optimistic yet conservative in his response. “We offered free rides during convention shows to and from hotels. When the attendees were in the cars, that’s how we engaged with them.”

“Personally, I think it’s usefulness depends on the message,” he says. How the message is translated and communicated goes back to authenticity in Alles’ opinion. “There’s so much noise, so many distractions. How do you decipher through all that noise?”

Looking at the current changes and trends within the retail market, Alles says, “I think you can use data and statistics to your benefit for whatever story you’re trying to convey. When you peel all that back, you can really look at it.” We hear about more Sears stores going under every year because of Amazon and Walmart.  “All the home delivery like the Amazons is creating laziness. In my opinion, it’s affecting their interpersonal skills.”

“Yet, Best Buy was almost dead,” he says. “And they’ve made a very strategic comeback.” He owes that to them steering away from an incentive-based sales approach. Prior to that shift, people were just being attacked because sales people were just out to make a sale. “There was no authenticity there at all,” he says. But Best Buy changed that. “They’ve increased the experience overall in their stores.” He notes that they’re also leaning more heavily on some of their key partners to have more of a footprint in the stores.

The responsibility of bringing consumers back falls heavily on the shoulders of the marketers. “We have to find relative ways to encourage or drive foot traffic back to ‘xyz’ storefront. That’s always the goal. At the end of the day, you’re always judged by your sales. It’s about finding the right messaging and making sure that once the consumer is back to feeling comfortable going to retail, that the experience there is more than what they expected to receive.”

While Best Buy has been successful in clawing their way back up, Carnival Cruise Lines were all but bankrupt. They’re now turning in $48 billion dollars in revenue. They called in CEO Arnold Donald, who is known as a turnaround artist. “He was specifically recruited to get them out of the trouble they were in. They’ve since seen 300% growth.” Not only that, but employee morale is up, and customer satisfaction has gone through the roof. Alles says, “Donald isn’t just looking at one particular area of trouble. He’s having a positive change effect internally, as well as on consumers.”

Alles’ list of people that have influenced his career is a mixed bag. “I’ve always enjoyed marketing and sports. I’ve also always enjoyed critiquing messages that are being thrown at me, going back to when I was a child.” He was raised by a single mother that had three jobs. His grandfather was an immigrant and worked his way up through life, paying cash for everything, and part of that rubbed off on him.

He also nods towards industry leaders that had an effect on him. “Seeing some forward-thinking brands like Nike back in the earlier days, I noticed they understood that athletes were road maps to the brand.” He was also fortunate enough to have worked for Vitamin Water when they were a startup. “They really knew how to affect employees and customers. They taught me I can’t be afraid to take risks.” Certainly sage advice, coming from Michael Repole, who has recently sold his second company to Coca-Cola.

“Hearing Mike, he liked to keep things simple. He was always preaching to not overthink, to go with your gut, and to not be afraid to make mistakes.” He advised Alles to align himself with good people, great products, good plans, and then to execute. “He would say that people would get almost to the goal line and then give up, thinking they were done, forgetting to execute. That’s the important part of it. You can’t be afraid of bureaucracy and red tape. You can’t be afraid to make decisions.”

MAG doesn’t typically take a public stand on political or social issues. “We’re fortunate enough to have several different companies.” You can’t be sure how far you can go in a certain direction without offending or upsetting someone. “As much as you want to stand up for something, you also need to be aware of your surroundings.” Whether or not that makes them more or less relatable to consumers, Alles’ belief is that it depends upon what issue is up for discussion.

Catering your communications and campaigns to where your target audience sits in your marketing funnel is key to success. “We have a few clients in the auto sector. You may need them only once or twice for your car. It’s usually a grudge purchase, as you’re cussing at your car. When we’re representing that brand, we want to be sure we’re getting in front of the consumer, providing helpful information so when they have a need, they’re remembering the experience they had, keeping us at the top of their minds as a positive experience,” he explains. “The follow-up message can’t become too annoying or it will accomplish the opposite from an effect standpoint.”

While they tend to take on the brand voice of those they’re representing, Alles says, “We need to know who we are, and remain true to that.” He continues in saying, “We’re midwesterners at heart, no shades of gray. We can’t be afraid to roll up our sleeves, since honesty is the best policy.” They remain true to their core values and beliefs. “There have been groups and companies out there that we’ve declined to take on as clients,” he says. “While we represent brands, we represent our company at the end of the day. I also represent my last name, which at the end of the day, is most important.”

If you’re looking to push into a career in marketing, Alles feels you need to get as much practical experience as you possibly can. “There is so much driven by understanding the consumer’s mindset and their thinking, so psychology is big with me.” He believes everyone should have at least a minor in psychology. “But you can’t beat practical life experience, so get as much as you can. Expose yourself to a lot to help you tighten that down to figure out what you’re doing.”

“If you have passion, have hunger, have drive. Entrepreneurship is outstanding,” Alles shares. “Just try not to be afraid. Try not to talk yourself out of something by using too much data or statistics.” They have their place in helping you be smart in your decision, but they’re not the be-all, end-all. “Don’t base your decision completely on that. Don’t forget to communicate.”